Moving On Is Not Giving Up 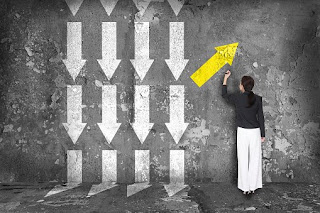 No business professional in history has ever had a perfect record. Though you only set goals for you and your team with the absolute best of intentions, sometimes you may find yourself coming up short. Everyone from our parents to our teachers to our mentors has told us over and over again to "never give up, never surrender," when sometimes, you have to do exactly that. The key to coming out all the better for it involves knowing how to identify that moment of surrender when it does arrive, and how to best handle what comes immediately after.

Look for the Signs

The best way to know when to move on from an objective in the world of business involves taking a moment to observe the world around you. How much time have you spent trying to accomplish this task? How much money have you expended trying to do this one particular thing? Would that time, money, and energy be better served if it were reallocated elsewhere within your organization?

At a certain point, you will start to feel diminishing returns. You've put your all into something and success is still just as far away as it was when you started. When you have that moment of clarity, the best thing you can do is look deep inside yourself. Do you really believe that you can pull off the challenge in front of you, or do you just hope that you can? If you fall into the latter category, it may be time to move on.

The most important thing to understand about when you should move on from an objective you just can't quite accomplish has to do with what happens next. If you set a goal for yourself and come up short of that mark, a lot of things have happened -but failure is not one of them.

You can choose to look at it that way if you'd like, but doing so actually limits the power of the moment you have in front of you. Maybe the objective you set wasn't the right objective in the first place, and everything leading up to this point has been trying to tell you that. It's a scenario you can see time and time again with some of the most successful companies in the history of business.

Apple, for example, had been set on releasing a smartphone for years - or at least a "smartphone" as per the definition of that term in 2005. Steve Jobs and his team tried, and tried and tried again, and eventually released something called the ROKR E1, a phone designed in conjunction with Motorola that was basically a regular phone with iTunes connectivity built in. The results were disastrous - a rare black mark on Apple's otherwise top notch record. Jobs had set a goal for himself and had failed to accomplish it the way he wanted.

But instead of saying "Apple and phones are not meant for each other," he thought differently. He realized that what he really failed to do was find the right hardware company to partner with to achieve this goal. He realized that by handling both the hardware and the software in-house, he could get at what he really wanted in the first place. Apple would go on to release the iPhone less than two years later and the rest, as they say, is history.

When you set goals for yourself, you always do so with the best of intentions. Remember that Albert Einstein's definition of insanity was "doing the same thing over and over again and expecting different results." Sometimes, you need to know when to try harder and when to try something else. However, moving on doesn't mean that you're a failure - it just means that you've cleared away the cobwebs, reassessed your priorities, and are ready to redirect that energy into something much more positive and appropriate.