Hitching a Ride on the Bandwagon 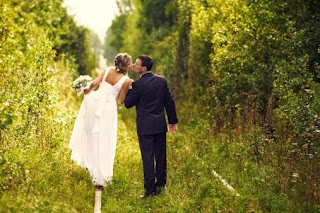 Have you ever wondered why most brides wear white for their weddings? The white wedding gown became common after the wedding of Queen Victoria to Prince Albert in 1840. Before that, brides would wear a variety of different colors for their big days. Women would choose blue, yellow, black, or even brown for their wedding dresses. The primary consideration was finding the nicest dress the woman already owned.

In the mid 19th century, however, that began to change.

The queen's wedding was well-photographed, and the image of the white wedding gown intrigued people. Other members of the higher classes began to choose white wedding gowns as well. Etiquette books and advice began to speak about the value of wearing a white wedding gown, especially as it communicated the bride's purity. Although it became increasingly more common, it still would not become mainstream among all the social classes for another century.

After WWII, Hollywood and film became increasingly popular, and guess what color brides wore on the silver screen? You got it: white. It was the presentation of Hollywood's brides that largely sealed the fate of the white wedding gown.

So what does any of this have to do with marketing?

Well, the white wedding gown is an excellent example of the bandwagon effect. When society's elites throughout North America and Europe saw the Queen of England marry in a white wedding gown, they felt driven to mimic her style. The same principle applied to the rest of society mimicking Hollywood. People saw their favorite stars adorning themselves in gorgeous white gowns and wanted the opportunity to take part in the style as well. A tradition was born, and now brides that choose to select other colors are viewed with mild surprise. It only took a few generations for the concept of a white wedding gown to become that firmly entrenched in culture.

This is the bandwagon effect at work. When we see our friends or those we admire doing something or using a particular product, we want to try that product ourselves. We feel that if these other people like this product or service, it must be worth trying. Finding a way to capitalize on this effect can help you boost your sales and brand loyalty.

Using the bandwagon effect in marketing


Like the white wedding dress, your company can benefit from the bandwagon effect. You might never make your product an inherent part of the national culture, but you will be able to increase sales and conversions by capitalizing on the 'me, too!' phenomenon. If you want to start developing a new marketing campaign, contact us today to help you get started.