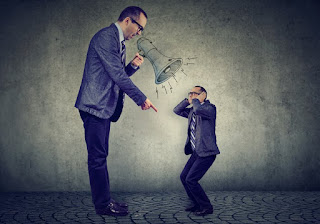 If you haven't had a frustrating boss in your life, then you are part of a slim minority.


Most of us have experienced a manager that's driven us to frustration or brought us to tears. Here are some "Bonehead Boss" stories from CBS News to make you grimace:


1 - After months of hard work, I closed a deal for $7,000,000. My customer bought the equipment because of our strong personal relationship and my company's technical capabilities. Six months later they doubled the order. My bosses, thinking that they had closed the deal, limited my commission to a fraction of what it should have been. I found a new job and quit. A week later my customer moved the order to my new company.


2 - I had worked at a camp for five summers during college when my best friend unexpectedly died from heart failure. When I returned from the funeral, my grandfather was on his deathbed. Obviously upset, I approached my boss and explained the situation. She said "Well, you'll have to get over it and get on with your life. I can't let you go again." My grandfather died the next week. When I told my boss about his upcoming funeral she said, "You should have planned better, you have no bereavement time left."


What if the Bad Boss is You?


Whether its disrespect, micro-managing, or verbal abuse, bad experiences with a boss can make people dread going to work each day.


But what if the bad boss is you?


According to the 2017 "Bad Boss Index" from Bamboo HR, here are seven mistakes managers frequently make. They:


How many of these characteristics apply to your leadership?


If you can relate, consider talking with your employees and asking how you can improve. Try to understand the impact of your faults and use this as motivation to change. People will trust you more when you are honest about your weakness.


Four Steps For Growth as a Leader


As you listen and implement change, here are four steps toward positive change:


Even if only a part of the criticism is true, your ability to sift through exaggeration (without rejecting feedback entirely) will grow you in leadership and character.


Don't discount a complaint or place the blame on others. Seek accountability and ownership for how others perceive you.


Give affirmation to the feelings and requests of others and look for two or three quick changes you can make to remedy frustration.


Try to sow in the opposite spirit: if you micromanage, be more intentional about delegating. If you criticize too often, seek to encourage more.


4. Establish weekly leadership goals and share them with someone you trust.


Have someone (a neutral friend or respected co-worker) hold you accountable for necessary changes, and schedule check-ins for at least one month as you move ahead.


Remember, a person who feels appreciate will often do more than you expect. Take ownership over your leadership and your team will flourish as you grow!